I just finished watching the latest AKB rock-paper-scissors tournament and want to write my thoughts on it. Statistically, I find it very fascinating, especially in conjunction with the results from last year.

END_OF_DOCUMENT_TOKEN_TO_BE_REPLACED

Iiwake Maybe and Amina – The Beginning of the Under-Appreciation 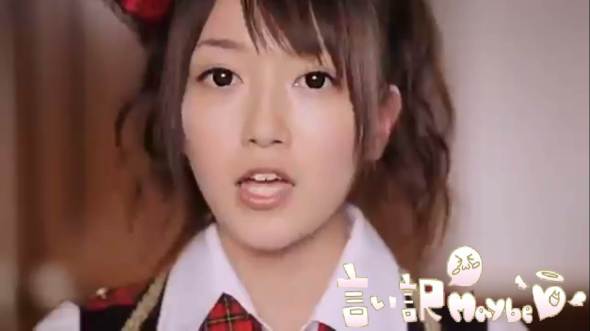 In the world of Japanese idols, members in a group are not necessarily a permanent members. They join and graduate, either forcefully by management or to pursue other career outside the group. A few weeks back, my favourite member of AKB48, Satou Amina, announced her graduation to pursue a voice acting career. She became my favourite member (or “oshimen” in otaku speak) because of her underdog status, how she managed to make people notice her despite barely any support from the managers.

In tribute to her graduation announcement, I want to look at one aspect of the management’s neglect that has become a sticking point for Amina followers, her supposed lack of screentime in the PV of Iiwake Maybe (言い訳Maybe), the promotional video to the single in which, with her 8th position (out of 21) in the member’s election  (senbatsu sousenkyo, an event voted by fans to determine the composition of the single), she was expected to make some substantial appearance. This actually makes me curious whether she was really screwed off her screentime despite ranking so high or not.

END_OF_DOCUMENT_TOKEN_TO_BE_REPLACED

I just finished watching the janken taikai clip after avoiding any spoiler for the last 5 days. It’s so much fun though I’d have loved an AKB girl to win it rather than Jurina (Personally, out of the senbatsu girls, I feel that Jurina is the one least needing of this center because she already co-fronts SKE and has centered a couple of singles, yet she actually won it…). Now I want to write something about it.

END_OF_DOCUMENT_TOKEN_TO_BE_REPLACED

One very fun competitions that AKB48 has held annually over the last three years is a rock-paper-scissors tournament (Janken Taikai). The members compete in a winner-advances competition and those who make it into the last 16 are selected to represent the group in the upcoming singles. The winner becomes the center of those respective singles. The competition is probably designed to add another tournament for fans to participate in and to give the more obscure girls their chances to shine in the sun, if they are lucky enough. AKB48 is also probably the only group who can pull this off, with so many girls available to participate!

END_OF_DOCUMENT_TOKEN_TO_BE_REPLACED

Branching from my love of anime, I have been very into various idol groups over the last few years. I started off with Morning Musume, fell in love with Idoling!!! (still my favourite group) but has recently warmed up tremendously to AKB48. It’s very easy to find subtitled materials online so that has helped my consumption level and my ability to get to know many of the girls. My oshimen (favourite member) is Sato Amina because I am a sucker for an underdog and she personifies that more than anyone in the AKB48 family. It is well-known amongst fans the level to which she got shafted after the first Senbatsu Sousenkyo when she placed 8th (for a more complete article of what makes Amina special, please read this blog by aakun. I started really paying attention to her because of it). I want to go one step further and try to see whether she there is any other girl who ranked better in the election despite getting no, or minimal, push whatsoever.